Why Is Google Play Services So Large? (Surprising Reasons!)

Being repeatedly notified of a lack of space on your device can be both concerning and frustrating.

In these cases, deleting unnecessary apps and clearing the cache are usually the recommended go-to moves.

That is until you get to the Google Play app and realize that the space it takes up on your device storage is massive, with little to no obvious ways of reducing it!

So, why is Google Play Services so large?

Well, this can be the result of a few different potential reasons.

The Google Play app is crucial to the functionality of many other Google-related apps, and is also an important part of your phone’s successful operation.

Data from multiple apps are passed through Google Play, duplicated, and stored in the app.

Every single time you use your phone, the data on the app is updated for your convenience and ease of use.

Google Play never stops running, contrary to what you might think. Its function is continuous, and it runs in the background for as long as your phone is active.

Finally, Google Play continuously receives regular updates to improve its functionality. These new updates may end up consuming more space on your phone.

In the article below we will explain what Google Play is, the type of data it stores, and the continuing functions it performs on your phone.

What Is Google Play Services?

Google Play Services is an essential framework that provides constant API support to the downloaded apps on your device.

The application ensures that you get the best performance out of your other software applications.

Google Play Services is an integral part of the Android operating system. It is a backbone of sorts that functions hand-in-hand with the Android system and most of your applications.

In direct terms, it is the connection between everything- tying everything together and keeping them all functioning properly.

For example, certain installed games would not operate without Google Play Games as the game would require the user to download the Google Play app before giving them access to the interface or functioning correctly on your phone.

Apps like Gmail or the Google Play Store would also not work without this in place.

What Data Is Stored In Google Play Services?

What type of user data is large enough to consume so much space?

Well, apart from Google themselves, no one can tell you the exact user data that their Services store.

On a general note, data like search history, frequent searches, image cache, descriptions for apps, and application data are likely to be a big part of it.

Information such as login credentials, passwords, GPS, subscriptions, and so on are also among the data collected, stored, duplicated, and updated by the software.

The app keeps all your sensitive information safe and is in charge of most- if not all- of your phone’s background tasks.

A significant contributor to the bulk of Google Play Services data are Google-provided apps like Google, Gmail, Play Store, Maps, and others.

For example, emailing has become a massive part of everyday communication in modern times and it often contains a lot of data.

From adverts and promotions to personal and business mails, we receive an average estimate of five emails per day.

This number in bytes may not seem like much at first, but it accumulates and becomes a large number over time!

Google Play Services automatically syncs and downloads a duplicate of all this data, eating up your storage in the process.

Also Read:- Why Am I Seeing “App Will Be Installed on Your Device Soon” When It’s Already Installed?

How Do I Reduce Google Services Storage?

Google Play Services cannot be uninstalled or deleted as it is a system software; that is, it comes with the overall Android package.

It is possible to uninstall its updates, as these can take up a significant amount of space as well.

Unfortunately, this only offers a short-term solution as the software will automatically re-update itself after a while.

The same is true of clearing the cache and data. These actions may clear some temporary space on your device, but they are not a long-term solution.

The software will redownload or resync the previously cleared data within a short timeframe, and you will find yourself back to square one.

The option of uninstalling updates and clearing data alone probably won’t be feasible.

However, disabling the software can be an effective way to fix the significant storage issues of Google Play Services.

First, clear the data via the Settings, and then tap on Disable.

There will be a prompt stating that disabling the app can affect the other functions of your phone; you can disregard this and disable Google Play Services.

This action follows the same process as the disabling option but is only available on rooted phones.

After clearing the data and cache, you can opt to freeze Google Play.

Freezing the app will limit the functionality of your device, i.e. it will still work, but with limitations.

With this solution you are only restricting Google Play Services from continuously updating or redownloading the cleared data.

It is essential to know that while both freezing and disabling are effective options for limiting the data Google Play takes up, they may halt a significant portion of your device’s functions.

Some phones do not allow you to select the Disable option.

In these situations, you can choose to restrict the number of functions Google Play Service performs instead.

Access the permissions via Settings, head to Apps, click on Google Play Services, and head to Permissions. Read through and click Deny for certain permissions (such as Storage).

Deleting unnecessary content from synced apps can prove beneficial when it comes to reducing the Google Services’ storage space.

You can also clear data and disable, or perform a Force Stop on whichever applications you don’t use all that often.

This action will reduce the amount of data the software duplicates and syncs. In doing this, you will subsequently lessen the strain on your storage space!

Is It Okay To Clear Data On Google Play Services?

In the most straightforward of terms, the data and cache of Google Play Services are automatically duplicated data.

If this data is cleared, the software will automatically recreate or regenerate it.

Clearing the data or cache does not negatively affect your data on other apps or phone functions.

In fact, it is even a recommendation by Google Support for users to do so in situations where the software needs a manual update.

Force stopping or disabling Google Play does not harm your phone either.

If you find that you need a required program to run again on your phone, you can easily visit the settings to re-enable the app.

Google Play Services is an essential piece of software on Android smartphones that performs a host of necessary tasks which allow the device to function effectively.

However, due precisely to this fact, it processes a lot of information that is stored as data and also requires continuous updates to keep it operating optimally.

Unfortunately, this can lead to the software increasingly consuming data space.

This effect is undesirable as you might find you need the space for something else, and the data bulk may also reduce your phone’s processing speed.

Sometimes, this problem is recurring, and clearing your apps’ cache is simply not enough.

When it comes to reducing the amount of space Google Play Services takes up, both uninstalling the app and clearing the cache are not ideal options due to being unsustainable long-term (courtesy of its self-sync ability).

Instead, freezing or disabling the app after clearing the cache, limiting its functions, or reducing the data it syncs from its component apps are the more favorable options when it comes to reducing the storage space consumed.

None of these actions will cause harm to your phone in the short or long-term, and the actions are all reversible- so what are you waiting for?! 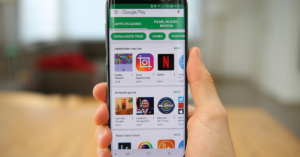